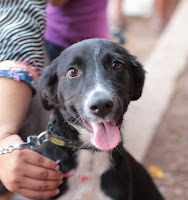 After the success of our second Mela held on the 6th May, the Blue Cross Society of Pune organized yet another camp on the 13th of May, 2012 at Nagarwalla School in Kalyani Nagar. This time, BCS took the opportunity to introduce free sterilization for adopted animals. The idea was that immediately after adopting a pet of their choice, the adopter had to compulsorily deposit Rs. 500 for the sterilization purpose. This was not a money-making tactic. This fees would then be refunded after a month only when adopters approached BCS hospital to sterilize the pet. The point of doing this, was to make sure that all animals which get adopted are sterilized, stay healthy and are looked after. 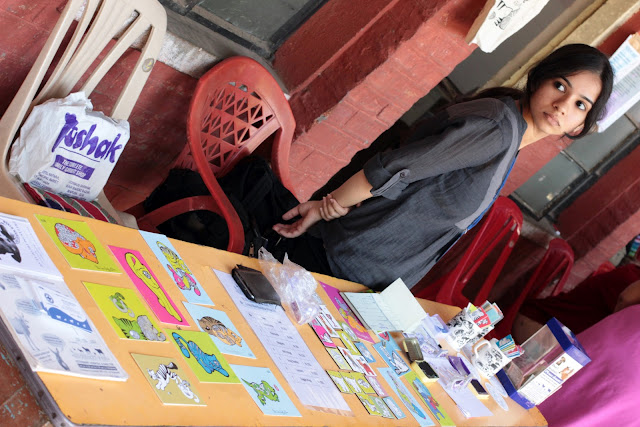 Various banners and posters displaying information regarding adoption, sterilization, do’s and don’ts concerning stray animals, were put up at the venue. Three classrooms were used as enclosures for the pups and kittens. A refreshment’s table with delicious food items and soft drinks was erected to keep people full. The merchandise booth drew a lot of attention with its assortment of interesting items that people happily purchased. 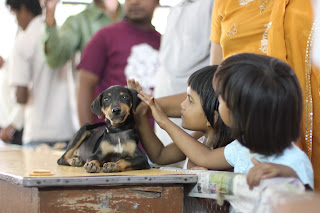 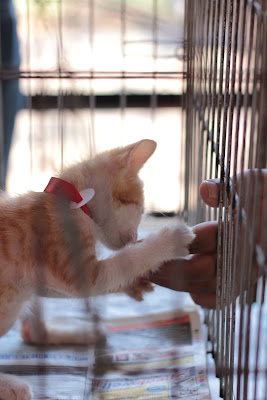 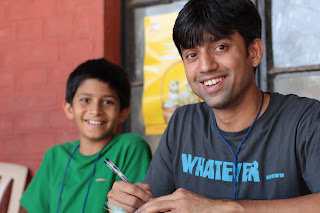 Volunteers posing for the lens! 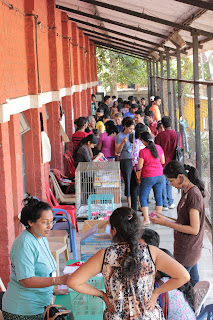 64 pups and 16 kittens were brought for adoption to the camp. Out of these, 25 pups and (to our immense surprise) all of the 16 kittens got adopted!!. After all, who wouldn’t want to adopt such adorable little fur balls! A systematic procedure was incorporated to help adopters with the adoption process. For the safety of the animals, so that they were not dumped or abducted, every person entering the venue had to submit identity proof or cash, which was returned later while leaving.

On one end, fosters who came with pups and kittens were sent to the vets arranged by BCS. They were given a free routine check-up and approved if found fit for adoption. They then had to get registered. On the other end, adopters had to fill in the ‘adoption form’ and take pet counseling from experts present around the camp. After this procedure was completed, the adopters were photographed with their new pets by the BCS photographs. A new and complete happy family indeed!
Just before the adopters left, they were provided with branded dog food and Whiskas cat food by Pedigree. Everyone left with a smile on their face and a promise to keep in touch.
(This event was featured in the Sakaal Times dated 14th May, 2012.) 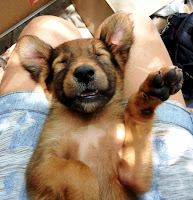 As we all know, every adoption camp is held to find loving homes for stray animals. The Blue Cross Society of Pune takes initiative in organizing such camps. After almost 3 months, it held its second adoption camp on 6th May, 2012 at Law College Road.  After the pre-event meeting on the 5th  of may 2012, where the volunteers discussed the venue, the right place was decided on. There were around 35 pups and kittens up for adoption. Most of the pups belonged to the FTII campus where they had been fostered and now brought to the camp. Apart from this, many other fosters brought their pups and kittens for adoption. 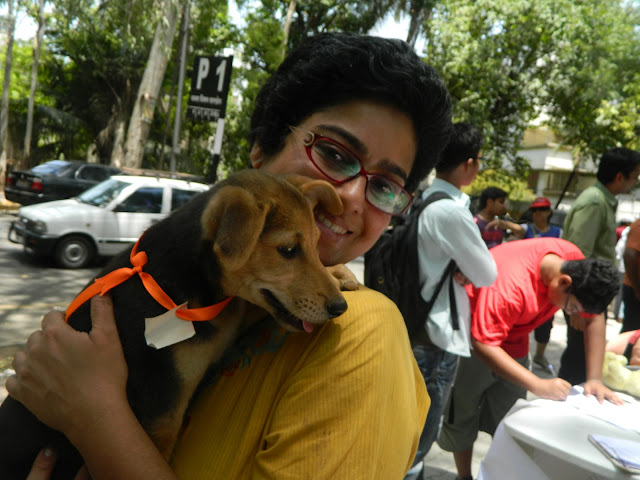 Sandra with one of her babies!

With our volunteers making a few last-minute preparations, the camp was all set before the arrival of fosters 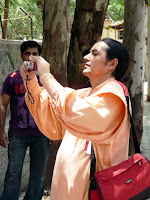 and their pets. To avoid the summer heat we decided to organize the camp in an area out of the sun and under some shade. Accordingly, canal road, was chosen as it was convenient for fosters to travel with their pets. When the fosters arrived at the camp they were pleased to see the efficient arrangements. A help desk was set up to assist visitors with queries. There was a booth where volunteers guided adopters about necessary forms and documents. There were two enclosures, one with pups and another with kittens. The Blue Cross merchandise booth sold ‘The Doodle Factory’ products consisting of fridge magnets, postcards, coasters, bags, mugs, bookmarks, t-shirts, and stamps. Around a 100 people attended the Mela. Many kind people donated for the good cause. The shutterbugs were all over the place capturing innumerable beautiful moments. We also welcomed an Iskcon representative who came to witness the event. ( Iskcon is a Non Profit, Social welfare & Spiritual organization.) 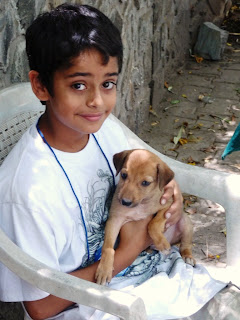 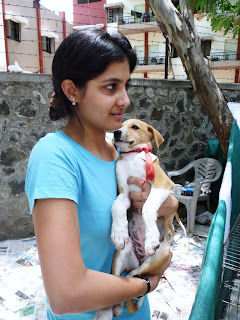 The day ended with 10 pups and 4 kittens being adopted by some amazing people. Everyone was contented with the day’s accomplishments. Finally, all the non-adopted pups and kittens were sent to their respective shelters. The volunteers wrapped up the camp and called it a day.
The animals that weren’t adopted on that day, have other camps in store for them. So no worries!
NOTE : The next day, the event was promptly featured in the DNA newspaper, promoting the welfare of animals.
Posted by Blue Cross Society, Pune at 11:34 PM 2 comments

Blue Cross is growing!
We now have a new space for long-term residents/dogs that need to be at the hospital for treatment.

Four enclosures, each 30ftx24ft, semi-covered, now home about 40 dogs, most of them long-term recovery patients, or permanent residents as they are maimed from road accidents.  Previously, they lived in a kennel facility, each in it's own kennel, making it very lonely and restrictive.  Now they have company, open air and space to exercise, play and move around.

This facility was inaugurated by Mr.Das, Secretary, Blue Cross on Thursday, March 15th, 2012. 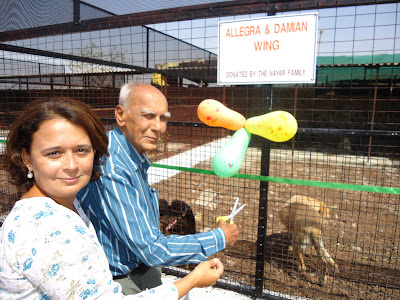 The construction of the facilities were made possible by the kind donation of the Nayar Family and have been named after their kids, Allegra and Damian.

The staff was treated to a morning snack, a ribbon was cut and now we have a bunch of happy dogs who have fresh air, companionship, and freedom to move around!
Posted by Blue Cross Society, Pune at 9:36 AM 6 comments

Every year, in addition to various other activities and programmes, the Blue Cross Society of Pune celebrates the National Animal Welfare Fortnight with various activities and events to create awareness about animals among citizens of Pune.

In January 2010, the Blue Cross Society of Pune organized the first ever large-scale adoption camp in the city for mixed breed stray puppies. This received an overwhelming response and 68 puppies found loving homes. Subsequently, the Blue Cross has organized 6 more adoption camps for mixed breed puppies, adult dogs and kittens. The procedures for pre-adoption counseling, health check up for the pups and kittens and follow-up for ensuring that the adopted animals are properly taken care of have been formulated in an SOP. Several other animal lovers have also started organizing similar events.

In January 2011, the Blue Cross Society of Pune organized a rally through some parts of the city. Other animal welfare organizations were invited to join. Volunteers carried banners about kindness to animals. The rally ended with a meeting to discuss ways of pooling in resources to reach out to more animals. The direct outcome of this meeting was the formation of an internet group called PALs (Pune Animal Lovers).

This year, on Sunday, 22nd January 2012, the Blue Cross Society organized a ‘mela’ at its Sunanda Das Memorial Animal Hospital and Shelter at Keshavnagar , with a wide range of  activities and educational as well as entertaining events for young and old. In spite of the hospital being located at a distance from the main city and the approach road being full of sharp stones, over 250 people attended the Mela between 10.00 a.m. and 4.00 p.m.

The trademark Adoption Camp was the first enclosure. Tables were set up for the health check up by the vets, volunteers were busy registering the animals, ensuring that they were in the shade and given water and walked at regular intervals. Animal lovers who had lovingly fostered the stray or orphaned animals for several weeks, waited for prospective adopters.


The main attraction turned out to be ‘Paws on the ramp’, a fancy dress competition for dogs. 10 dogs participated in the show and each one seemed to enjoy the attention they got. Owners had created imaginative costumes: Red Riding Hood, a ballet dancer, an I-Pug, and even a pug dressed as businessman! The event, compèred by young volunteers, was a great success. The winners were given gift vouchers by Eukanuba Dog Food.

Under the trees, along the avenue leading up to the hospital, there were a number of stalls such as


Visitors were given a tour of the Hospital premises by volunteers. They visited the horse stables, the cow shed and the donkey shed, the cages with sick of recuperating dogs, the kennels for abandoned or rescued dogs, the Out Patient Department and the 2 operation theaters.

The walls and pillars inside the Hospital had been beautifully decorated with paintings of animals in vibrant colours by students from FAD, a school of art and design. Soft boards which lined the walls of the rooms were full of newspaper cuttings and  photographs  of Blue Cross activities as well as graphs and charts showing the figures of OPD, surgery and ABC operations done by us.

A pandol had been set up in the quadrangle where about 150 children  from 2 schools : Aman Setu and Erin Nagarwala Schools were shown an audiovisual presentation by Intervet about rabies and other animal related issues. At the end of the interactive session, the children took a pledge, promising to avoid cruelty and suffering to animals and taking small steps to help all living creatures. The chairman of the Blue Cross society administered the pledge and presented certificates to each student.

In the afternoon, there was a 2 hour First Aid Workshop organized at the Hospital. ResQ Charitable Trust was invited to conduct the workshop. We hope to build up a network of trained volunteers who will be able to respond immediately to rescue calls.

A Dog Handling and Dog Obedience workshop was conducted by Petsitters. They also offered counseling tips to pet owners.

The event was widely publicized for two days by Radio Mirchi and televised by two channels. Several newspapers carried pre-event and post-event write-ups.

Ever since the event , citizens and especially schools are calling up to ask whether more first aid workshops are planned. It appears that the primary objective of the event, namely, creating awareness about animals, seems to have been achieved. We acknowledge with gratitude the unstinting efforts and excellent team spirit of our workers, staff, vets, trustees, well wishers and our band of about thirty volunteers ranging from age 12 to 85.

For more pictures do visit our Facebook page - http://www.facebook.com/bcspune

Blue Cross's first Adoption Camp for 2012 is happening this Sunday (22nd January2012) 10. a.m onward's as a part of the "Animals & More" event at the Blue Cross Hospital, Mundhwa!!

Want to adopt the cutest pup or kitten?  Then you have to come!

RSVP to our event and drop a mail at bluecrosspune@gmail.com for further information.
https://www.facebook.com/events/126550717464854/ 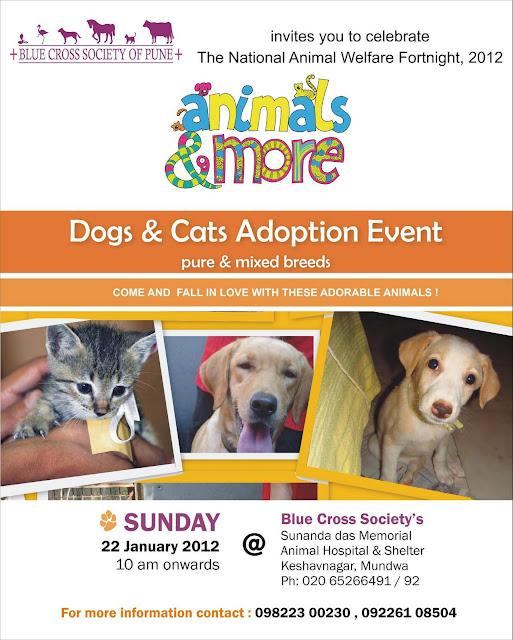 Posted by Blue Cross Society, Pune at 11:03 AM 2 comments

Here's a sneak peak at the Wall Art being done by FAD at the hospital..and there is more to come... 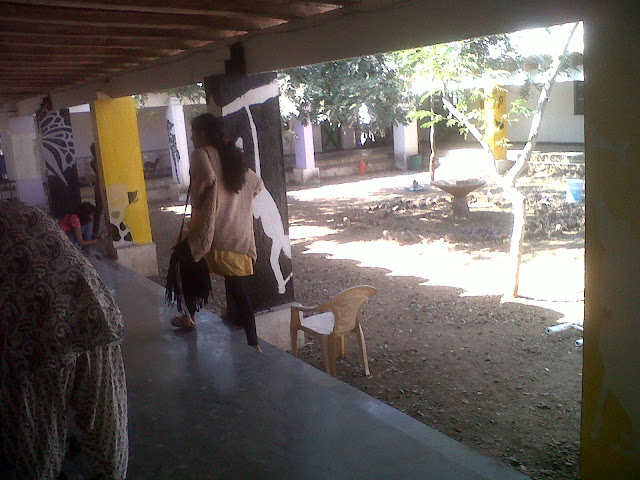 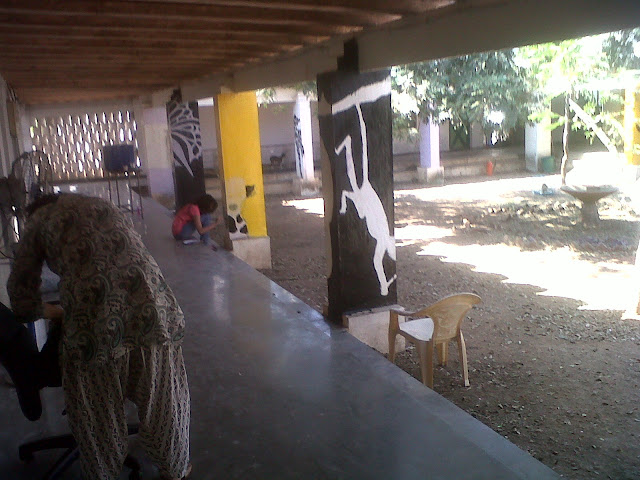 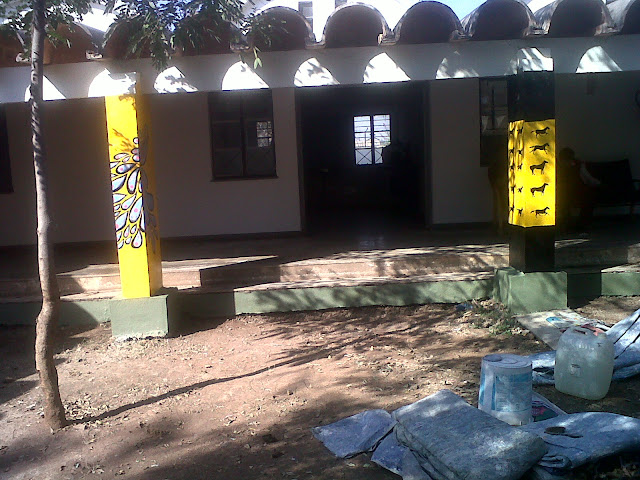 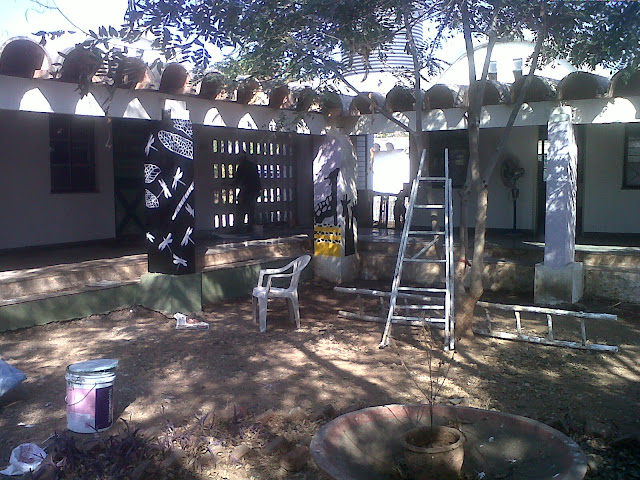 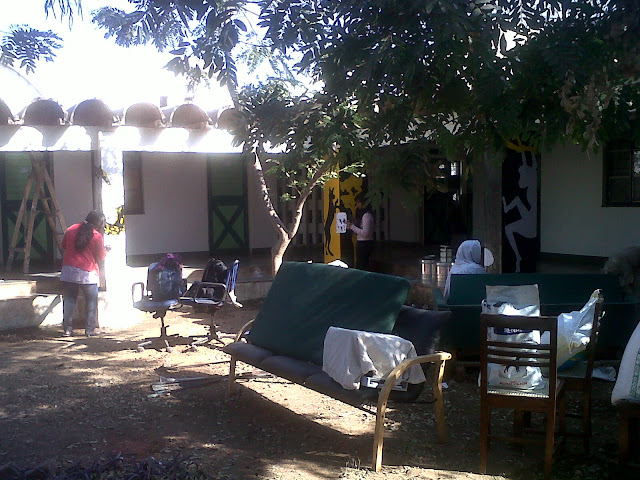 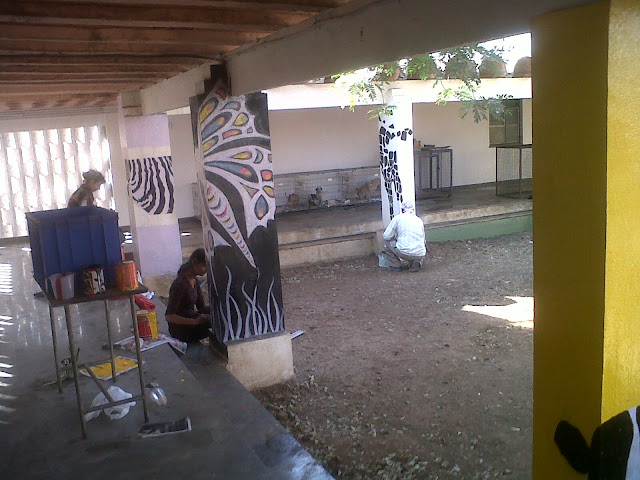 Posted by Blue Cross Society, Pune at 10:47 AM 2 comments

Have you ever seen a dog or a donkey or some other animal suffering in the streets and wished you could do something to reduce its suffering? Often, first aid given in time can save its life.

So do register for the Animal First Aid Workshop which will be conducted by ResQ Charitable Trust as a part of our "Animals & More" event and make a difference to the lives of animals in our city.

Limited seats are available so make sure to Pre - Register (compulsory).


For rescue / treatment of domestic animals at the Keshavnagar,Mundhwa Hospital :


(Please note that the BCS does not provide pick-up facility for rescue but provides 24hrs help and treatment facility at the Sunanda Das Animal Hospital, Mundwa)

We as Blue Cross Society of Pune have some recommendations...tried, tested and successful to help you raise your pet better....